Not really vis but this was important in the day.

Back in the Computer Lab., at the University of Cambridge in about 1992 there were at least two filter coffee systems; both running on a slow drip-filter setup. The Rainbow Group had access to one machine in a walk down a corridor to a small kitchenette; but the network team had to travel a lot longer way to their coffee machine. A problem of lack of enthusiasm to travel meant that often they would find an empty coffee pot – or even worse stale coffee. A solution was a camera video stream that linked to the linux server and stream images to X Windows. So when new fresh coffee arrived this would be obvious from the image on everyone’s desktop.

http://64bits.co.uk/ have been rebuilding old systems and in East London they rebuild the Cambridge Coffee pot scenario – with similar equipment. There is a wikipedia page on the original: https://en.wikipedia.org/wiki/Talk%3ATrojan_Room_coffee_pot 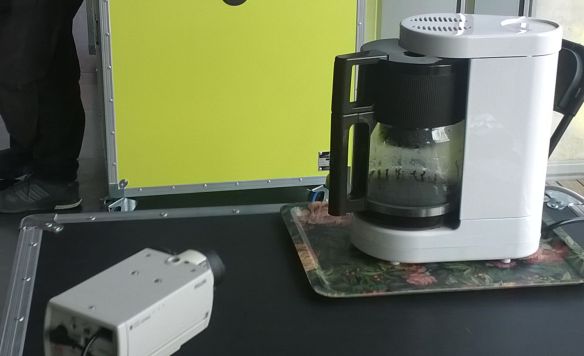 Is video streaming – visualisation – well definitely yes as it is an interpretation. Due to low quality network speed and CPUs; the small 128×128 video stream of images had to just include the coffee level and also the fps was about one frame every few seconds – but that is a good rate and good enough resolution for “coffee pot observation”.